Goofy Things I Did (as a kid…)

Today’s headline should indicate that my intention this week is to write some stuff that’s more lighthearted. But, in the interest of somewhat fair reporting, I should notify you that the term “as a kid” refers to every day I’ve been on this planet right up until now. They say you are as old as you imagine yourself when you close your eyes. I’ll add that such a statement is true, if you don’t come anywhere close to a mirror. 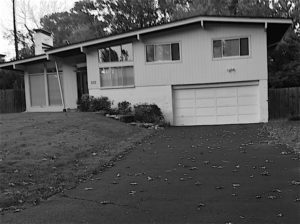 This was home. A lot of goofy stuff happened here. (Click to enlarge)

I was, indeed, a goofy kid. I was the last of five Wilber children who grew up in the idyllic (too good to be true, but it was true) St. Louis suburb of Kirkwood, on a small cul-de-sac of only 10 homes. I had two brothers and two sisters, but the order was staggered so that my brothers were considerably older than me. Del Jr. was 11 years my senior and Rick was 8 years older. Growing up, I didn’t have a handy “big brother” to show me the ropes about life. When it came to sports (my greatest interest in most of my existence) depending on the era I was either meeting chums from other neighborhoods for endless games of improvised baseball, touch football, or hoops or on my own. I could also possibly be playing with or actually coaching neighbor kids who might be five or six years younger than me. I actually did that. I formed a touch football team of younger kids and coached them, although we had a hard time finding other teams to play. Never in my life did another boy live on Woodleaf Court who was my age. Lots of girls and that’s another story for another day, but no boys my age. I did have plenty of friends within walking or bike-riding range, but none in my specific neighborhood.

As a real little kid, say until the time I turned 40 (I mean 12) most of it was on my own. My sister Mary dominated me around the basketball hoop on the driveway then, but I had to “make up” a lot of the other sports I played.

There is no basketball hoop in this recent photo of our former home. It would’ve been halfway down the drive on the left side as you’re looking at it. Whether it was by myself, or with Mary, or with guys like Scott Youngstrom, Bobby Stryler, or later in life with high school buddies like Bob Mitchell, the “do it yourself” sports world usually happened on this driveway, in the yard, or out in the street. That lone spotlight on the front of the house below the window on the right would allow a kid to shoot hoops well into the night, when the stars were all out and the world was quiet and dark. Kirkwood was (and still is) a very safe place. Woodleaf Court was safer still. You couldn’t dream of a better place to grow up. Just the memory of it embraces me like a loving hug.

Both the front and back yards were stadiums for me. When I was around eight (I think) one of my Christmas presents was a full St. Louis Football Cardinals uniform. The whole deal. Helmet, pads, jersey, and pants. I had no one to play with, and didn’t even know another kid who had the same stuff, so I played full games of football by myself, on the front yard. I’d run and pretend to get hit. Or I’d run a pass route and dive to catch a football I tossed in the air myself. This is the definition of goofy. Did I care? No. Numerous neighbors were no doubt watching me, as members of my own family also might have been doing, but I didn’t care. I wanted to feel what real football players felt, and I wanted to get grass stains on my uniform and mud on my hands. I wanted to be my Football Cardinals idol, wide receiver Bobby Joe Conrad. We shared the same first and middle names, why not share football stardom?

At some point, around the age of 10 or 11, I kicked a football and another kid said “Wow, you’re good at that.” At that point, I kind of fell in love with kicking and punting, but it was again a solo pursuit. There were huge oak trees on both sides of the drive, and I’d spend hours (I’m not exaggerating) either place-kicking or punting balls out there, allowing them to hit in the middle of the trees and pinball down off the branches to the ground. It’s a great thing my dad worked during the winters at Casey’s Sporting Goods in Kirkwood. I always had at least four regulation footballs and basketballs at my disposal. By the time I was 12, I entered my second season on the Kirkwood Cardinals junior football team as the third-string quarterback but the full-time kicker and punter. I took it so damn seriously I practiced an extra four hours in the front yard on top of the practice on the football field. Yep, I was goofy.

That driveway and the front of the house also afforded me endless hours of practice perfecting the art of being an outfielder, even though I never actually became an outfielder until high school. I’d take a tennis ball and my glove out to the drive, stand near the house, and throw the tennis ball on an upward trajectory off the the area between to the two bedroom windows. Such a toss would make it fly in the air well over my head, at least halfway down the drive. I’d have to go back, look up, find it, and often leap to backhand it at full speed. Practice makes perfect. But goofy, I know. I didn’t care who was watching.

During childhood, my dad brought home a batting practice contraption that’s hard to explain. It was tall metal structure with a real baseball hanging on a rope right about in the middle of the strike zone. The ball actually had a hole drilled through it so that a knotted rope could hold it there. When you swung and hit it, the ball would arc up and hit a large canvas pad, and then fall back down. Do you think I did that for hours by myself, letting all the Woodleaf Court world watch my goofiness? Of course I did.

The driveway itself was the single greatest Wiffle Ball stadium in the world. Right up through high school my classmate Bob “Mitch” Mitchell and I would wage epic Wiffle Ball battles that could easily last six hours. One day, we played from 12 noon to 8 pm, and didn’t even stop when a thunderstorm rolled through.

In the backyard, when I was very little (I’m guessing no more than six or seven) my dad got a shovel out and carved three bases and a home plate in the grass. No real bases or a plate, just dirt spots in the correct shape and order. Can you guess who played back there, for endless hours, sliding into bases and making a mess of himself? Yep, me. In my Minnesota Twins “TC” cap pretending I was Harmon Killebrew, or Bob Allison, or Earl Battey. I was the son of a Cardinal who lived in the St. Louis metro area, but I was a Twins fan because my dad worked for them. And I was goofy as hell.

Later, when the baseball was getting more serious in the upper levels of elementary school and I was pitching a lot because I was the best player on the team and that’s what those guys did, Dad built a mound in the backyard about 50 feet from the house and painted a strike zone on the concrete foundation that was exposed below the wood. It was totally on me to throw strikes and not break the wood siding. I never did that. I had more intense focus back there than in any class I ever took in grade school or high school. Hours were spent out there, day after day, all by myself. And the added benefit was that the ball would hit the wall and rebound right back at me. Not only did my pitching improve, my fielding did too. Did I increase my focus by pretending every pitch was in the ninth inning of the seventh game of the World Series? Of course I did. 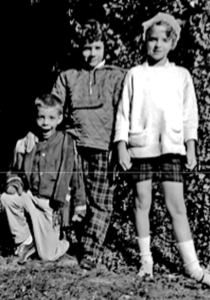 Yep. I’m the goofy one. Surprised I didn’t grow up to be Jerry Lewis, actually…

One year, I couldn’t tell you when but I was still in grade school, the whole Woodleaf Court contingent decided to have block party in the middle of summer. Since it was a cul-de-sac and not a through street, the city of Kirkwood allowed us to block it off and put tables and grills right out in the street. I had an idea…

Drew Copley still lived right on the circle at the bottom of the street. She and her husband treated all of us as members of the family, and I’m sure many of those afternoons at “Drew’s house” were really just babysitting efforts. She had a huge and marvelous backyard, and I recall knocking on her door about 10 days before the block party, and asking “What would you think about not mowing the yard until the party? The day before, I’ll come down and mow a golf course into your yard out back, and afterward I’ll mow the whole thing.”  She loved the idea, and I mowed a complete miniature 9-hole course into her lush Zoisia grass. We had doglegs to the right and left, but no water hazards. I guess I wasn’t goofy enough to figure that out, but the length of her grass made all the holes easy to see and understand. For all the dads on the street, those plastic golf balls and the course I carved were the hit of the block party.

Kickball in the street, touch football, Kick-The-Can, and just summer afternoons riding our bikes around the cul-de-sac as if that was heaven enough. It was a dream of a way to grow up. I get that “loving hug” just remembering living there. I miss it, frankly. I miss it a lot. But boy I was goofy. That’s OK, I think. I still feel young at heart. I don’t feel like an old guy at 64, an age I couldn’t even conceive of being for most of my life. I close my eyes and I can be 10 again. Or 20. Or even 30.

And then I try to jog or, heaven forbid, look in the mirror to shave. It’s all in what you think when your eyes are closed. I still feel like a goofy kid. Just ask my wife…

If you just perused this blog and in any way it made you smile, or laugh, or just recall the same stuff in your life, please click on the “Like” button below. If we all do that, we’ll never get old.

See you next week.

Bob Wilber, at your service and goofy as ever.