The Perfect Game Foundation® works with those who aspire to a business career in sports/entertainment by providing mentoring, networking, and assistance in finding internship and job opportunities.

Additionally, as available small financial grants are awarded to help with internship costs.

TPGF executes a balanced program of assistance to candidates from all backgrounds who subscribe to the concept that a business career should be based on teamwork because as Harry Truman once said, “It is amazing what you can accomplish if you do not care who gets the credit.”

In the history of Major League Baseball through the 2011 Season only 20 Perfect Games have ever been pitched. More people have the trip to the moon and back than have pitched a Perfect Game. It is recognized as the epitome of Excellence.

Just as rare is the Perfect Game for a hitter.

On August 27, 1951 in Philadelphia at Shibe Park against the Cincinnati Reds, 10 days after the birth of his first daughter, Del Wilber Sr. came to bat 3 times, took 3 swings, got 3 hits, hit 3 Home Runs, scored 3 runs and had 3 RBI. The Phillies won 3-0. A perfect game.

The Perfect Game Foundation® is thus constructed in the memory of Taffy and Del Wilber Sr. whose legacy lives on today through the people they guided and the lives they impacted. They were career baseball people who are remembered by those they touched as caring, dedicated, unselfish and generous purpose driven mentors who saw opportunities where others saw barriers and always strove for Excellence.

They personified loyalty and life as a team sport and totally believed that all of sport including baseball, in addition to being a wonderful career path, was a perfect forum for doing good for others.

In memory of Taffy and Del Wilber, Sr.

For The Perfect Game Foundation® and the people it helps, being a ‘good teammate’ is the mantra. This epitomizes what Del Sr. stood for during his baseball days. Likewise Taffy was known for her unselfish giving of time, attention and effort to assist others – while being the Mother of 5 and a career baseball wife.

Both Taffy and Del were open-minded individuals who turned a blind eye to race, creed, gender or ethnicity, choosing instead to see only potential.

Taffy and Del Wilber Sr. met during WWII and married soon thereafter. Del and Taffy formed a bond and a family that would consistently be far greater than its individual parts. Del was a 10-year man in Major League Baseball as a player/coach, backup player, good teammate, and clubhouse leader.

Following his playing days he spent another 40 years as a coach, manager, and scout, impacting the careers of countless players, rookies and veterans alike.

Taffy blazed brave new trails through the gender-biased worlds of broadcasting, management, and public relations as on-air talent for KMOX, the CBS-owned radio station in St. Louis, hosting a program called “Taffy On The Town.” She also balanced her on-air dream with her role in the creation of the Pinch Hitters Club in St. Louis, in which Cardinal wives worked to assist charities and local causes, and in later years she joined the Cardinals’ front office before creating and owning her own public relations firm. 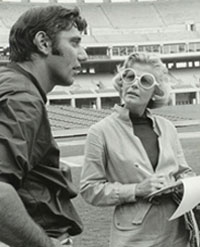 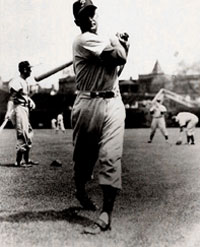 Take a photo tour of Del and Taffy’s life »

The Perfect Game Foundation® was born at the intersection of three important tenets:

Recognition that a business career in sports is a tremendously fulfilling calling with enormous embedded opportunity to do good for others;
Understanding that the sports career supply/demand curve was tilted away from aspiring candidates and that entrance-level assistance was needed;
Desire to recognize and remember those who have made business careers in sports far more than just a job.

Oh The Many Shirts I’ve Worn… And Jackets & Shoes Too!

Yes, I’ve been away from blogging for a while. I could list all the interviews I’ve done in support of my book How Far? (and that does take up a lot of time and mental energy) or I could fabricate totally made-up stories about how far I’ve traveled recently, or maybe even abducted by aliens, […]

Life On The Road

At the end of 2015 I officially retired from my life on the road. How long had I been traveling? Basically since I was in the womb. In the Wilber family, my father was always traveling thanks to his lifelong employment in baseball. My childhood was filled with annual trips to Spring Training (either on […]

Maybe The Grass Is Greener Over Here

I know it’s been a while, if by “a while” you mean nearly a month, but when your PR agency is keeping such a constant flow of leads and introductions coming your way, and you’re scrambling to keep them all organized, answered, and scheduled, there’s not much time for blogging. I’ve got a break until […]